All things 3d and fun

I met Andre Kuipers in person! It happened at an “inspiration seminar” that was hosted by an institute I had followed a course at last year. Out of the blue I got an invitation for this seminar which had, among other speakers, Andre Kuipers.

I have been interested in space since I was a child so I could not pass this one up. It was great to hear him talk about his struggles and victories. When the talk ended, the host said Andre would not be available for signatures and hand shaking but I could not resist.

I had brought my book after all and I just had to shake the man’s hand! He was really nice about it and, in the end, took his time for everybody. It could not have went any better and I still get excited even thinking back to it. 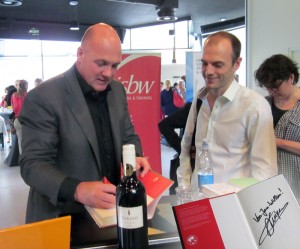